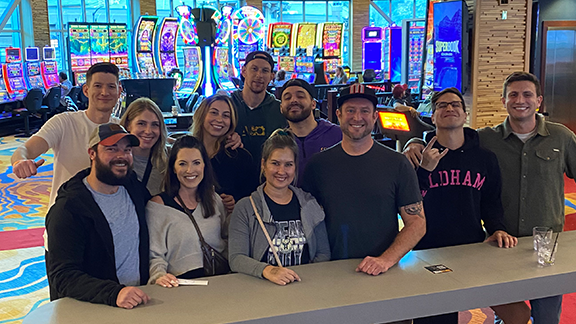 On Nov. 6, SuperBook Sports held a UFC 268 watch party at its sportsbook at The Lodge Casino in Black Hawk, Colorado. It went so well that it’s hosting another fight fiesta this Saturday for UFC 269, which will feature title bouts involving two of the sport’s biggest stars, Dustin Poirier and Amanda Nunes.

Last month’s event attracted some 100 attendees, many of whom took advantage of a “KO Special.” Anyone wagering $68 or more got a $5 bonus voucher for every knockout, technical knockout, or disqualification on the card. Saturday’s watch party will feature the same special, only with a minimum $69 wager to mirror the last two digits in “269.” The KO Special is not restricted to watch-party attendees; rather, it’s open to all mobile bettors in Colorado and New Jersey who have SuperBook accounts.

The SuperBook enlisted several UFC personalities, including Michael Chandler, to promote November’s watch party and the KO Special on social media in a manner you won’t find among active athletes in most other professional sports. That’s because, as Kristin Mackey, the Colorado SuperBook’s head of marketing, explained to CO Bets, the UFC’s rules around its athletes promoting  sports betting are far more permissive than in other sports.

“Colorado has an incredible community of fighters and fight fans. We felt that it was a great way to celebrate that by partnering with fighters from around the country to promote the UFC 268 event,” Mackey said. “The UFC 268 watch party at The SuperBook at The Lodge Casino exceeded our expectations. This was the first time SuperBook Sports in Colorado showed the event live, and we are excited to do it again for UFC 269 on December 11.”

Saturday’s SuperBook soiree, which is the only UFC watch party in Black Hawk that night, will be hosted by UFC announcer Ron Kruck, who will answer fans’ questions and provide them with “insider tips.” While the watch party doesn’t start until 6 p.m. local time at the 7,000-square-foot sportsbook, the 15-fight card starts at 4 p.m. on ESPN+ with a bout between Tony Kelley (+160 to win at the SuperBook) and Randy Costa (-180) at T-Mobile Arena in Las Vegas.

The pay-per-view portion gets underway at 8 p.m. MT with a bout between Sean O’Malley (-310) and Raulian Paiva (+260). A little later, Amanda Nunes, who boasts a 21-4-0 record and hasn’t lost a fight since 2014, will face Julianna Peña (10-4-0) for the women’s bantamweight title. At -900, Nunes is by far the heaviest favorite of the night. If you’re interested in getting plus money on her, you’ll be best served trying to predict the exact round in which the fight, scheduled for five rounds, will end. The likeliest scenario from a bookmaking standpoint is that Nunes will stop Peña in the first round (+145), with the odds fattening to 16/1 if you think Peña can answer the bell in the fourth before tuckering out.

In the final fight of the night, Charles Oliveira (31-8-0) will defend his lightweight title — which he claimed back in May by beating Chandler — against Dustin Poirier (28-6-0). The challenger, having TKO’d the wee Irish wanker, Conor McGregor, in his last two fights, is the bigger name and is favored to win at odds of -150.