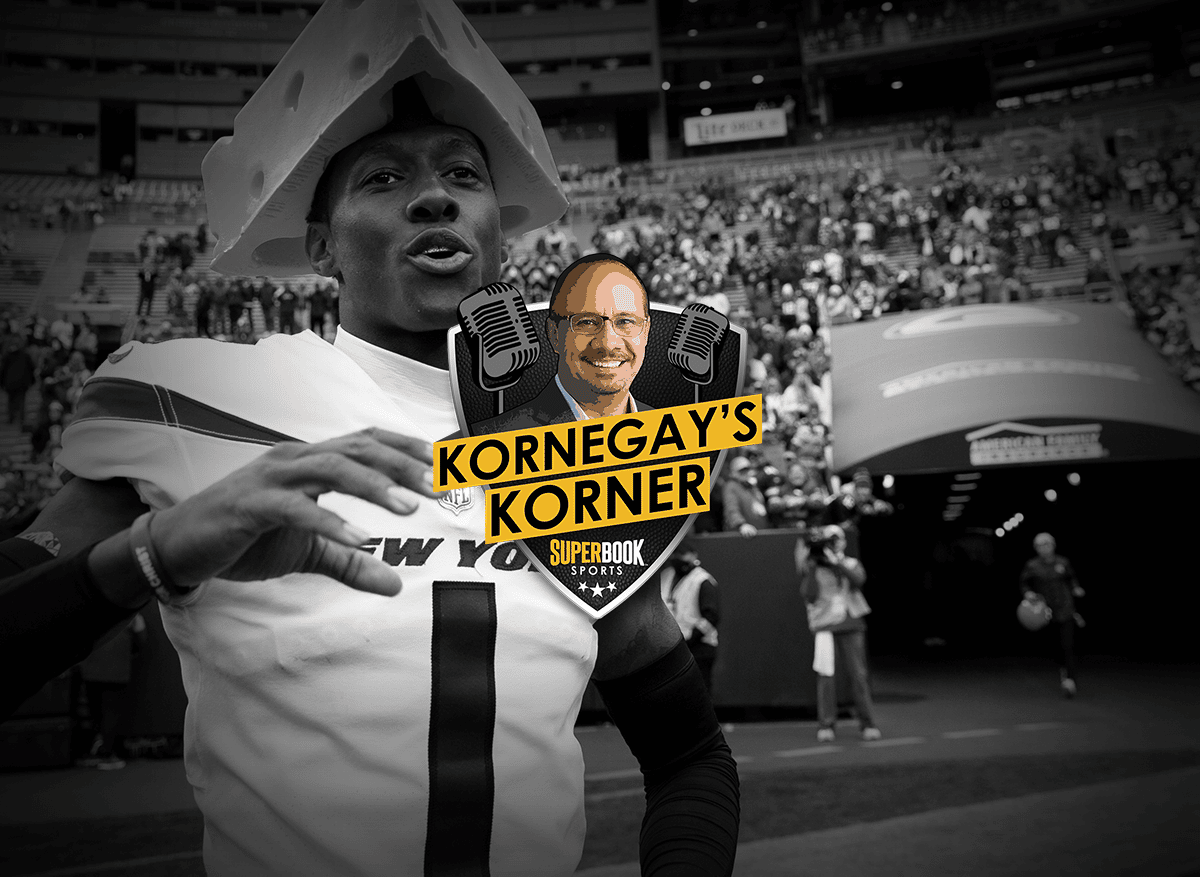 “They’ve been around a long time and have seen it all,” said Jay Kornegay, the head oddsmaker at SuperBook Sports, following a weekend in which the Giants advanced to 5-1 and the surprise Jets (4-2) went into Lambeau Field and walloped the Packers 27-10. “Their bandwagons take a little more time to fill than others.”

It might – perhaps, maybe, possibly – be about time to hop on the wagons rolling through the streets of Manhattan and Jersey. The Jets and Giants – out of nowhere – look like they’re for real. Kornegay says, however, the eye test back east is a little more thorough than anywhere else around the league.

“They’re cautiously optimistic,” Kornegay added. “I have a friend that’s a true-blue New York Football Giants fan. He told me after their victory Sunday that ‘maybe they aren’t a fluke.’ To me, he’s not sold.”

But the numbers don’t lie. Whether it’s the Giants and Jets respective 5-1 and 4-2 records, or the handle at the book, both teams are on a cautious trajectory out of the NFL doldrums.

Added Kornegay: “I would expect us to see numbers on both the Jets and the Giants to increase in New Jersey and other states if they continue to cash tickets for their supporters.”

New York, New York! For the first time in a long time, both teams that call America’s most famous city home are relevant.

Even if their stadium is technically in New Jersey, the Jets and Giants are the talk of the NFL world. The Jets earned a shocking 27-10 win over the Packers to move to 4-2 on the year and firmly in a wild card playoff spot for now. Although the Bills will be tough to catch in the AFC East, could the Jets make the dance for the first time since 2010?

And how about those Giants? A fourth-quarter comeback against the Ravens saw them win a thriller 24-20. The G-Men are now 5-1, trailing only undefeated and 6-0 Philadelphia for the best mark in the entire NFL. They won’t see the Eagles until December for the first time, but that Week 14 game could go a long way toward deciding who wins the NFC East. They’ll also close the season in Philly on January 8.

We may not have gotten a Mets and Yankees World Series, but don’t rule out a Jets and Giants showdown in the Super Bowl. Okay, that’s still hard to see, but crazier things have happened.

2. Tennessee Might Just be the Best Team in the Country

Undoubtedly the best game of the Saturday slate was Tennessee vs. Alabama. It was a game for the ages that resulted in the Volunteers walking it off on a game-winning field goal to hand the Nick Saban-led Crimson Tide a 52-49 loss. The loss boosted Tennessee to the No. 3 team in the country, while the Crimson Tide fell to the No. 6 spot. For the first time this season, Bama is on the outside looking in, and they will need some help to get back in the college football playoff mix. Assuming the Vols can get past Tennessee-Martin this week, they will take on Kentucky with a top-four number next to their name on Oct. 29, which follows with a game against the Georgia Bulldogs on Nov. 5.

Tennessee is legit. The Vols proved they are a force to be reckoned with and now have earned a spot within the coveted top-four. Taking down Alabama is no easy task, but there were signs that a loss could be coming for the Tide. Alabama was pushed twice already this season against Texas and last week against Texas A&M. Credit to the Vols for being prepared and staying focused throughout the game. This is the highest Tennessee has been ranked in the second half of a season since 2001.

Tennessee received 15 first-place votes in the latest AP poll, and you could make the case they have had the best wins of all the teams in the top-four rankings with victories against No. 17 Pitt, No. 20 Florida, No. 25 LSU and, most recently, Alabama. If the Vols can stay the course, they will set themselves up for a spot in the big dance for the first time in school history.

3.  Outside of the top four, it’s a crapshoot in college football

This was arguably the craziest weekend of college football this season. There were plenty of upsets and some movement within the top four, which has a new CFB playoff and top-25 picture.

To get things started, Michigan took care of business against Penn State, rolling 41-17. The win got the Wolverines back into the top four and cemented their status as the No. 2 team in the Big 10. With games against Michigan State, Rutgers and Nebraska on the horizon, the Wolverines are primed to remain undefeated entering their final two games of the regular season against No. 18 Illinois and the finale against Ohio State on Nov. 26. The win against Penn State was big because it was the best victory of the season for a Wolverines team that had played an otherwise suspect schedule.

In other news atop the polls, Ohio State had the week off, and Georgia demolished Vanderbilt, 55-0. Clemson slipped out of the top four despite beating Florida State 34-28.

Despite having two losses on their resume, Utah flexed against USC for a 43-42 victory to hand the Trojans their first loss of the season. The defeat dropped USC out of the top 10 and bumped Utah up to the No. 15 spot in the rankings.

TCU was down 24-13 at the half against Oklahoma, but they rallied to win 43-40 in overtime to remain undefeated and jolt up to the No. 8 ranking in the country. In three consecutive weeks, TCU has beaten ranked opponents and will square off with No. 17 Kansas State this weekend.

Photo of the Week: Peyton Manning broke out victory cigars in the Tennessee locker room