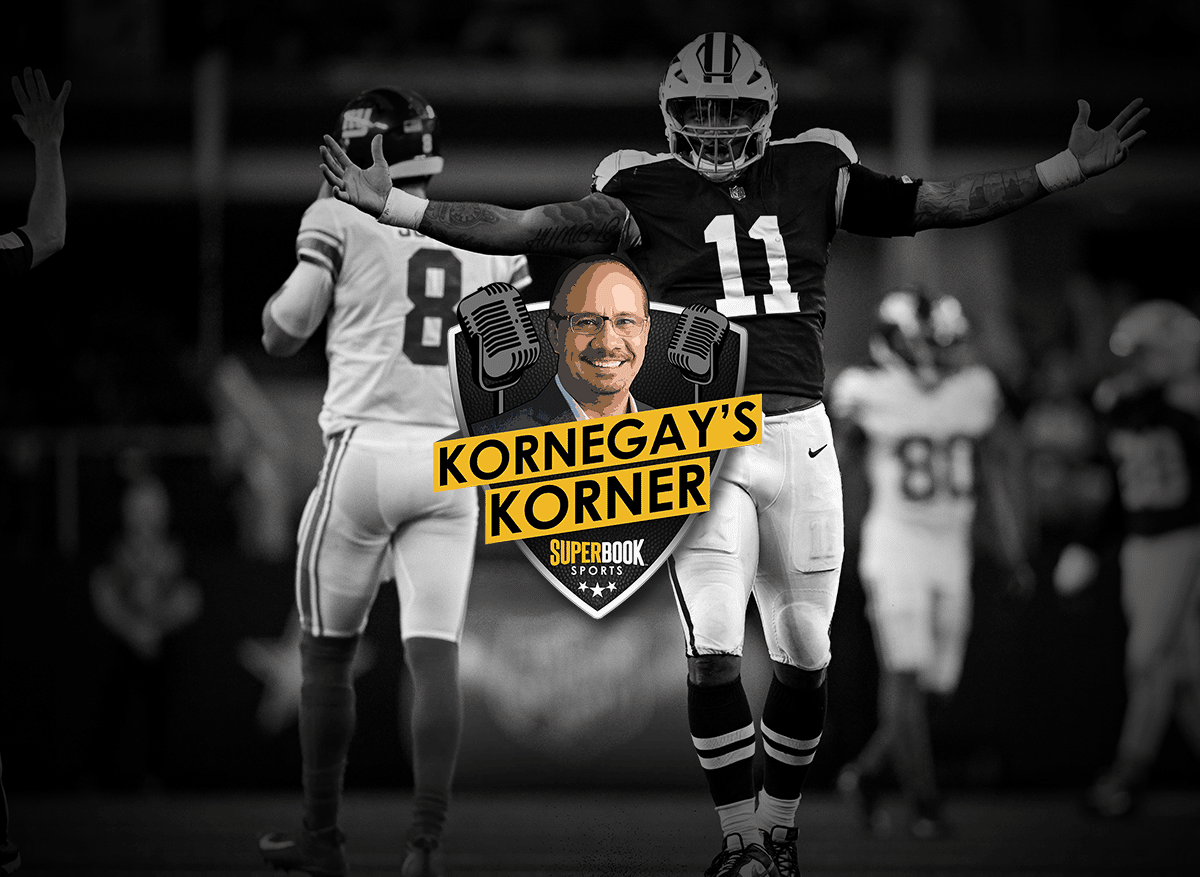 Home » Kornegay’s Korner: Get in While the Gettin’s Good

If you’ve got a hunch, it’s best to act on it. In other words, don’t wait around until the train is leaving the station.

“NFL futures are popular year-round. Whenever a team strings together a few good performances, you can expect more money on them on a weekly basis and the future pool,” said Jay Kornegay following Week 12’s NFL slate. “We’re seeing a steady pool of tickets on Kansas City and Buffalo – but those teams on the second tier are also seeing a flow of support. The 49ers, Dolphins and Cowboys are the hot teams as we head into the last six weeks of the regular season. It makes sense as these teams are playing the best football at this time, outside the Chiefs, of course.”

While it’s not a guarantee that the odds or prices chances as a team’s popularity grows, that’s usually the case. The Dolphins are perhaps the best example: Before the season, the SuperBook odds had Miami as a 50/1 longshot to win the Super Bowl; as of this morning they’re 16/1.

Miami might be “too obvious” of an example – and nobody had a crystal ball clear enough to see that the Dolphins would be as good as they’ve been. Perhaps a more reasonable pick would have been the Chiefs – a team that many might have picked to win it all back in August. Still, the odds have made big swings in K.C. The Chiefs entered the season at 12/1 and have climbed all the way to 3/1. Kornegay sees this type of pattern every year, with more than just Super Bowl odds.

“The NFL MVP pool is similar to the Super Bowl pool,” he added. “Whenever a team gets rolling it usually involves a couple of hot players. Those players will see backing from the betting public. At first, it was all Josh Allen with Patrick Mahomes taking second fiddle. Now, bettors are taking shots at Jalen Hurts and Tua Tagovailoa. Some of the longer shots will get some attention but not to the level of top four. Guys like Burrow, Jackson, Geno Smith and even Kirk Cousins will get attention.”

It’s never too late to get in on the action. But remember, the early bird gets the worm.

For as much as the Commanders make headlines off the field thanks to their PR failures and highly disliked owner, the product on the field is one of the best stories in the NFL this season. After surviving a wild finish against the Falcons, Ron Rivera’s bunch escaped with a 19-13 win in Week 12 thanks to an interception at the goal line in the final minute.

Washington is now 7-5 on the season, and all alone with the No. 7 seed in the NFC. If the Commanders make the dance, it might be the most-improbable playoff appearance of the year.

This group wasn’t expected to do much at all, but Rivera has them overachieving in a big way. In fact, the NFC East currently occupies four postseason spots, which would be a wild development in a crazy season should it hold.

Meanwhile, the Seahawks gave up 40 points to lose to the Raiders in overtime at home, including a walk-off, 86-yard touchdown run by Josh Jacobs. Once thought to be the toast of the league, Seattle has come back down to Earth. They’ve lost two straight games and now sit at 6-5.

The division is poised to go to the 49ers, so Pete Carroll’s bunch will have to scratch and claw to try to snag a wild card spot. But even if they don’t make it in, the Seahawks have a great pick coming their way from the Broncos, thanks to the Russell Wilson trade. Currently, that selection would be No. 3 overall, completing one of the biggest heists in NFL history.

2. A shakeup atop the CFP poll

Michigan defeated Ohio State, rolling to a 45-23 victory, in the biggest game of the season by far. This is the first time the Wolverines have beaten the Buckeyes in consecutive games since 1999-2000.

The win should line Michigan up with one of the top-two spots of the College Football Playoff, assuming the Wolverines don’t stumble on their final step this weekend. The Buckeyes were favored by over a touchdown in “The Big Game,” but the Wolverines tightened up the game plan in the second half and wound up running away with the victory.

Ohio State entered the second half with a 20-17 lead. However, the Michigan defense limited the Buckeyes to one field goal throughout the second half. Heisman hopeful C.J. Stroud tossed two interceptions, while Michigan QB J.J. McCarthy posted three touchdowns. Overall, it was an impressive performance from a Wolverines team that was the considerable underdog and yet another signature win for coach Jim Harbaugh.

Another big upset that affected the playoff picture was South Carolina taking down Clemson, 31-30. D.J. Uiagalelei laid an egg by tossing for only 99 yards, while his counterpart, former Oklahoma QB Spencer Rattler, dazzled. Rattler put up over 300 yards passing and two touchdowns; 126 of those passing yards came from the hands of Antwane Wells. This loss firmly knocks Clemson out of the CFP picture despite being within the top-four just weeks ago. This is the first time South Carolina has beaten Clemson since 2013.

With LSU losing to Texas A&M and USC taking down the Fighting Irish, the Trojans are in a prime position to sneak into the CFP. Caleb Williams is now considered the favorite to win the Heisman after Stroud’s tough showing. He strengthened his case with a clean game against Notre Dame, posting four total touchdowns.

George beat Georgia Tech, rolling 37-14. And TCU throttled Iowa State, setting the stage for the playoffs. Only the conference championship games this weekend can impact who gets in.

Georgia is probably safe even if it loses to LSU. Same might be said for Michigan against Purdue. TCU has to remain undefeated, making its game against K-State a must win. And one-loss USC must avenge its lone defeat of the season, as the Trojans seek revenge against Utah.

3. It’s all about coaching in the NFL

The saying “defense wins championships” is maybe one of the most-inaccurate statements in all of sports. Because in the NFL, one side of the ball doesn’t win you anything.

Teams have to be good in all aspects of the game. Does this include defense? Absolutely. And is defense a critical part of winning games? Of course. But it takes more than just defense; it takes more than most casual observers can imagine.

Coaching is the most-crucial part of any football team. It’s more important than a good quarterback, a good defense, offense; it trumps them all. A good coach can win with anybody, and a bad one can lose with anybody.

Nathaniel Hackett gets Russell Wilson, a Pro Bowl QB and arguably the best defense in the league. What does he do? He’s 3-8 and on the hot seat in Denver. Kyle Shanahan, on the other hand, wins with Jimmy Garoppolo year after year. Bill Belichick wins with Mac Jones, Jacobi Meyers and Rhamondre Stevenson as his best offensive weapons.

It’s not about who a coach has that matters; it’s about what you can do with them. The Vikings made little to no changes to their roster from 2021 to ‘22, yet they already have more wins through 11 games than they did all last season. Why? Because they hired a new head coach, as Kevin O’Connell replaced Mike Zimmer.

One that knows what he’s doing and has a creative scheme. The same goes for Mike McDaniel and the Dolphins. Same with Brian Daboll and the Giants. The list goes on and on.

A great head coach is what wins championships. Can players help with that? Of course. Tom Brady didn’t win a Super Bowl his first year in Tampa because of Bruce Arians. But it’s harder to find a guy like Brady than a guy like Shanahan or Mike Tomlin or even Belichick.

Head coaches get paid like players, as they should. They are the most-vital part to a team’s success.

Video of the Week: There really is a 12th man in Seattle