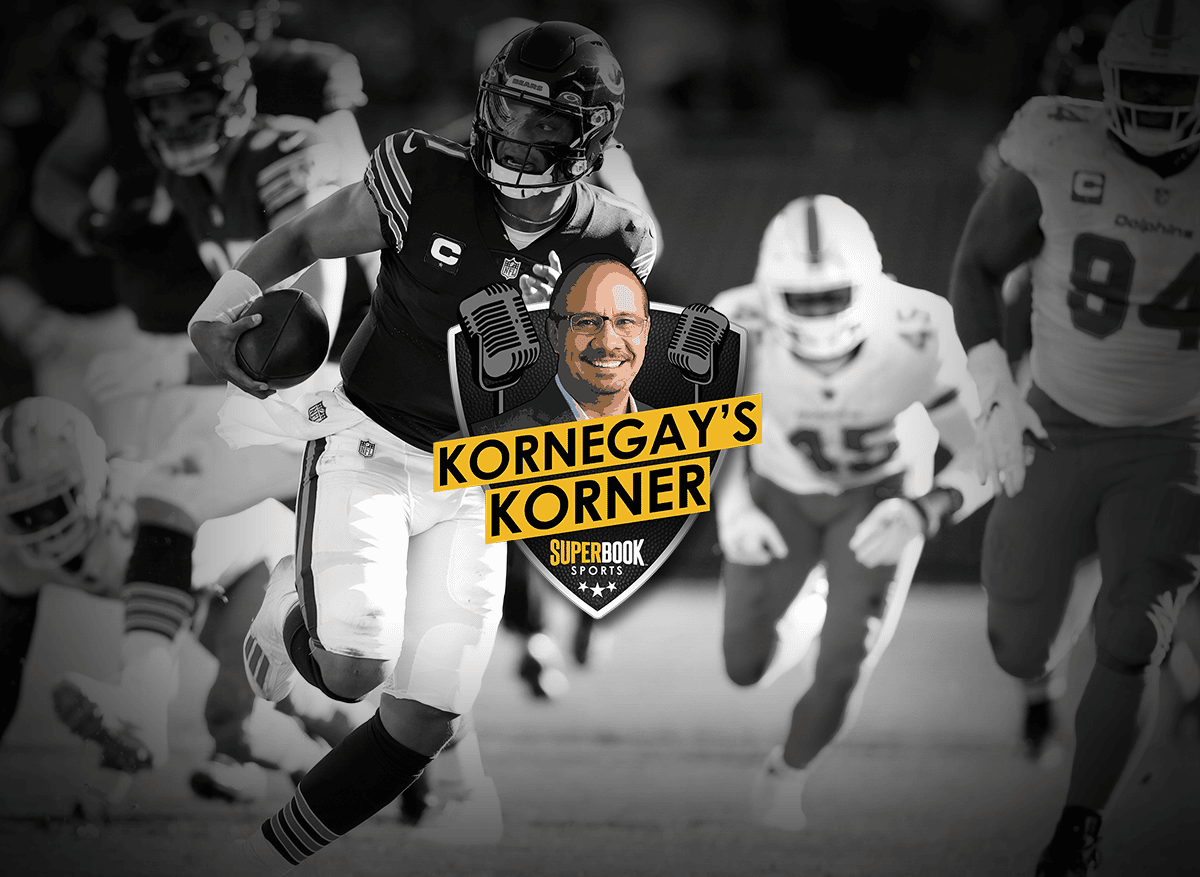 It was another wild weekend in the NFL. There were big games, big upsets and big comebacks. But by Week 10, bettors are wise and getting wiser to all of it. Wins and losses don’t always sway the savvy.

And when it comes to betting on the NFL, SuperBook Sports head oddsmaker Jay Kornegay has seen it all more than once. At the midway point of the 2022 season, Kornegay took Monday afternoon to dish on one topic: Who do y’love?

Kornegay on Tom Brady’s big comeback: “Bettors still have Brady scars from the first half of the season and those aren’t easily forgotten. The Bucs’ comeback is a start in improving that relationship, but by no means does that result cure the earlier heartburn – the Bucs won but they still looked horrendous and that will slow down any support.”

Kornegay on the Chiefs-Titans thriller: “The Titans proved they’re not pushovers and can run the ball, which normally translates being a competitive team. Tennessee won some fans over with their Sunday night play, but it won’t last long if they fail to cover next week against the Raiders.”

Kornegay on why the Eagles have yet to surpass the Bills or Chiefs in Super Bowl futures: “Playing the Jets or Titans is a little different than knocking around the Texans. We have larger samples with the Bills and Chiefs – not to mention Josh Allen and Patrick Mahomes. They have proven to the bettors and oddsmakers they can contend and win. The Eagles are the new kids, and they will have to establish themselves against tougher competition before those odds flip. They’re doing what they’re supposed to do but it will take a couple more quality wins before they’re the favorites.”

Kornegay on the Seahawks: “The ‘Sharps’ have been on the Seahawks since the early going and have been rewarded for that. It’s taking the general public a little longer to be sold on Seattle.”

Kornegay on the Bengals: “The Bengals – outside the egg laid in Cleveland – are starting to show what their true colors are. Cincinnati has established themselves as a lower top tier team, but cracks in their play have prevented them from reaching a status as a clear cut contending team.”

Kornegay on the Dolphins: “The Dolphins are somewhat in the Seattle category. They started off hot by beating the Bills and then had a couple of hiccups; that will always deter public betting support. They must be more consistent to garner wagers from the average Joes.”

Kornegay on the Jets: “The Jets are the biggest surprise of the group. They win, but win ‘ugly.’ The public will take its time with a team that plays great defense and has very little offense. Many believe the Jets are fool’s gold. Their defense is no joke and opened many eyes by shaking up Josh Allen with their physical play. Moving forward, the betting public will take its time with the Jets but Sundays upset is a jumpstart to that process.”

1. The changing of the guard at QB in the NFL

Are we witnessing the changing of the guard when it comes to the quarterbacks across America’s most-popular sport? It sure feels like it.

Aaron Rodgers lost to the Lions, as the Packers dropped to 3-6 on the season. That’s not a sentence anyone thought they’d read this season. Rodgers threw three interceptions, all of which came in the red zone.

Meanwhile, Matthew Stafford and Tom Brady played one of the ugliest games of the season, a 16-13 Tampa Bay win, only salvaged because Brady managed to deliver a great drive in the final seconds. The defending champion Rams dropped to 3-5 on the season while the Buccaneers got a desperately needed victory to move to 4-5.

It’s weird to see, but some of the all-time greats appear to be falling off a cliff as NFL defenses get better and better. While that was all happening, Tua Tagovailoa and Justin Fields were playing the most-entertaining game of Week 9 in Chicago, a 35-32 Dolphins win where offense wasn’t a problem. Each quarterback threw three touchdowns, while Fields ran for a ridiculous 178 yards and another score.

The young guns popped, while the old guys struggled. The NFL never fails to be fascinating.

If the season ended today, three of the four teams earning a berth in the College Football Playoff wouldn’t be a surprise. Georgia, Ohio State and Michigan have all been there before, with the Bulldogs and Wolverines facing off in one of last year’s semifinal games.

But the fourth team currently in the mix is a newcomer. TCU is one of four remaining undefeated programs in college football, with their 9-0 record enough to jump them ahead of some one-loss teams with impressive resumes. So, if the Horned Frogs can run the table, they’ll likely get an invite.

If not, however, other teams are poised to be this year’s version of Cincinnati. Other schools that have been on the outside looking in have a chance to crack the club.

Tennessee has the best shot, as the Vols are No. 5 in the latest College Football Playoff rankings. Given that Michigan and Ohio State face each other on Nov. 26, the Volunteers have a great chance of jumping back into the top four.

For those tired of the same teams in the mix every year, this season figures to offer something new. Clemson and Alabama appear out of the chase, with four newcomers ready to join the party.

3. NFL offenses are providing a great opportunity to cash in

Betting the under is not flashy and it’s not fun to root for, as it’s cheering for failure. But that doesn’t mean it can’t be lucrative. Now more than ever, it’s time to look that direction.

In Week 9, prior to “Monday Night Football,” there were eight games that hit the under and four that hit the over. That is a 67 percent chance of getting it right. And it’s the continuation of a season-long trend.

There hasn’t been a single week in which the over has hit more frequently than the under. Not one. That’s a trend worth jumping on.

In particular, it’s a smart way to go in games involving certain teams. These are the best bets when it comes to the under:

In a league that often seems impossible to predict, that’s worth noting. Looking for a sure thing? Well, the Broncos, Bills and Colts hitting the under is about as close as it gets in the NFL.

Video of the Week: The hit on Josh Allen that could change everything in the AFC