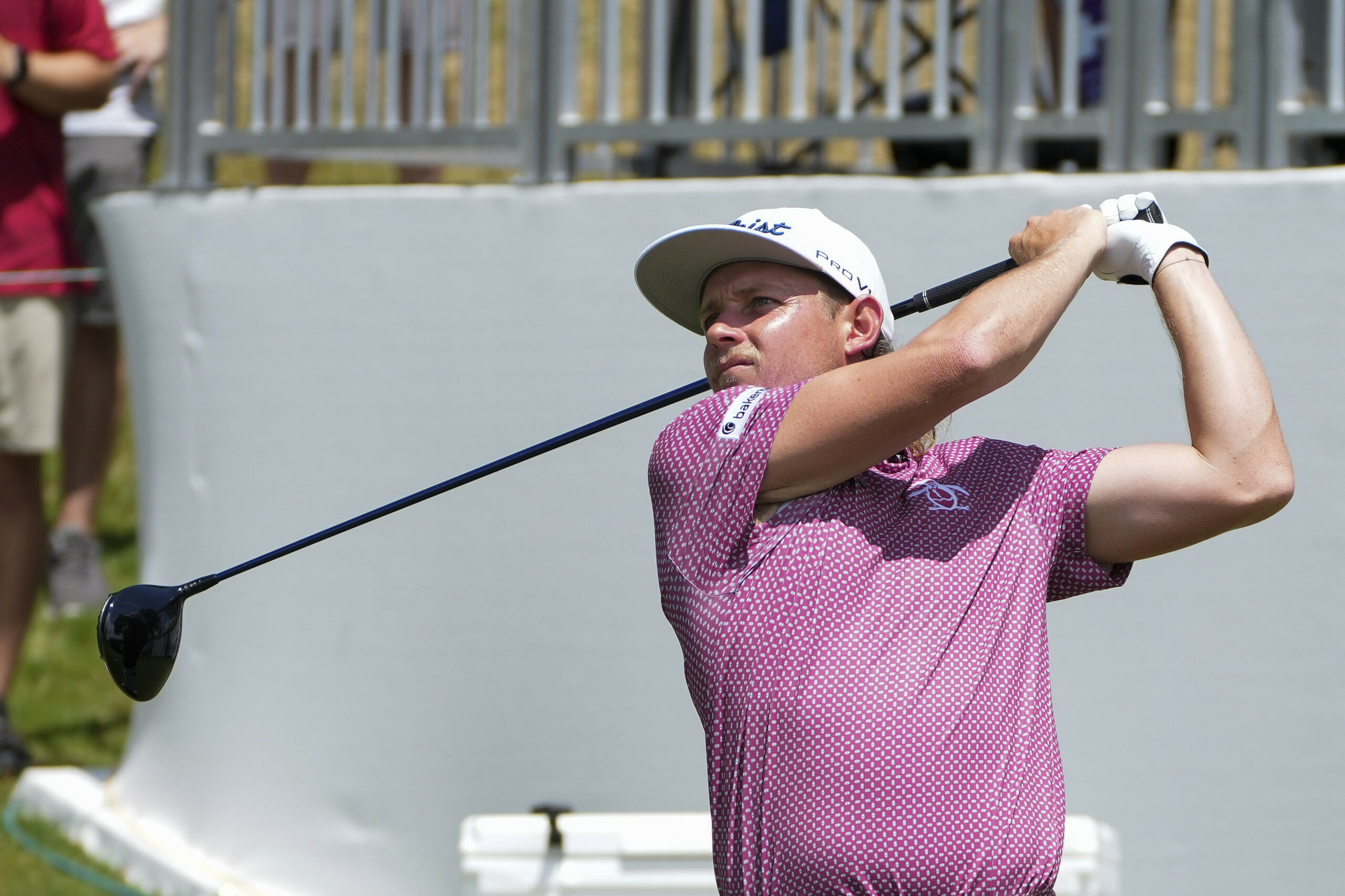 Cam Smith received a two-stroke penalty Sunday during the FedEx St. Jude Championship, the first event in the PGA Tour’s three-leg playoff schedule. Smith didn’t argue the ruling — and many fans understood the logic behind the ruling — but the timing of the penalty infuriated sports bettors and DFS players.

Smith, who closed the third round as the betting favorite at some sportsbooks, was penalized for a Saturday infraction, but the penalty wasn’t announced until Sunday. Smith’s violation came on the fourth hole on Saturday when his drop out of a penalty area was still touching the line of the penalty area, but rules officials who noticed the potential violation on Saturday evening didn’t discuss it with Smith until Sunday.

On Sunday, the penalty was assessed and announced to the public. While Smith and the leaders had yet to tee off, other players had started their rounds, affecting single-round DFS lineups.

PGA Tour Chief Referee Gary Young told the media a rules official noticed the potential violation Saturday, but they didn’t approach Smith until Sunday because “we felt very comfortable at that time he was familiar with the rule, and that it was such a quick view of it that we had, at that time we decided it wasn’t worth following up on.”

Officials watched a rebroadcast and saw the potential infraction again, this time determining it was worth asking Smith about. They expected Smith to say he believed he performed the drop properly, but he acknowledged the ball was touching the line, as it seems he lacked a clear understanding of the rule.

“So at that point there’s no turning back,” Young said.

Smith went from two shots back of the lead to four shots back, a significant difference with only 18 holes left in the tournament. The 2022 Open Champion shot a 70 on Sunday, ultimately finishing tied for 13th place and six shots behind eventual champion Will Zalatoris.

The penalty for Smith not taking “full relief” from a penalty area wasn’t the main issue for fans and bettors. It was more so the timing of the announcement, which occurred about 24 hours after the violation.

Add in reports that Smith plans to leave the PGA Tour for LIV Golf in the coming months, and it only becomes more awkward. Smith’s remaining events on the PGA Tour could be numbered, as he withdrew from this week’s playoff event, citing hip pain.

From a sports betting viewpoint, information is critical. For gamblers wagering on a tournament winner following the conclusion of the third round, Smith was a popular choice. He was playing well, and leaders in front of him lacked experience closing out important tournaments. Given that information, he seemed like a logical bet.

Unfortunately for bettors who placed wagers Saturday night, the odds board shifted Sunday due to the penalty. This hurt Smith backers, and it may have even kept some bettors away from Zalatoris. The ball-striking stud’s chances of winning increased with Smith dropping down a couple shots, and Zalatoris took advantage of a golden opportunity by chasing down the lesser-known leaders with a 66 on Sunday before winning in a playoff.

The late penalty announcement also affected third-round bets, including Smith’s matchup bets. SuperBook Sports graded out third-round matchup bets Saturday evening, and the operator doesn’t change those outcomes on the next business day. SuperBook did refund wagers on Smith to win that were placed after the third round, though.

It’s a dicey issue, all right

The late announcement from the PGA Tour put sports betting operators in a tough position.

“It obviously didn’t take any of the betting markets into account with something like that,” said Jeff Sherman, SuperBook’s vice president of risk management.

The PGA Tour’s delay in addressing Smith’s penalty until Sunday was perplexing, but not a violation of league policy.

“From a gambling standpoint, it really is a dicey issue because, unfortunately, the rules allow for this,” Harig said.

The PGA Tour, which follows United States Golf Association and R&A rules, doesn’t have a policy that requires rules violations to be penalized before the next round. Rules violations can’t be implemented after a tournament is completed, but they can be assessed any time during the tournament, which only further complicates situations like Smith’s. Without a time limit, rules officials seemed content waiting hours to address the penalty.

“The PGA TOUR Rules Officials are committed to identifying and adjudicating rules violations as efficiently as possible,” a PGA Tour spokesperson told Sports Handle via email. “However, on rare occasions, the process of identifying a potential violation, conducting an investigation and making a determination takes some time.

“In this instance, had the rule not been applied, then the rest of the field could have been negatively impacted. While this system, including one competition spread across four days, creates some challenges for the sports betting community, it is critical to protecting the integrity of the competition and every participating player.”

Another complaint often uttered by DFS players relates to the PGA Tour announcing players’ withdrawals just minutes before scheduled tee times. Announcements sometimes come after tee times start and DFS contests lock in lineups. The PGA Tour doesn’t provide much transparency regarding injury information, so a bettor might not necessarily know a player is dealing with an injury problem, whereas in the NFL league-wide injury reports provide helpful information about player availability.

Not the first rules controversy

Cam Smith’s situation was hardly the first controversial golf ruling of its kind. In 2010, Dustin Johnson grounded his club from an unmarked bunker in the PGA Championship. The violation, which occurred with Johnson holding a one-shot lead on the 72nd hole of the tournament, resulted in a two-stroke penalty that kept Johnson out of a playoff.

Johnson had another rules controversy in 2016 at the U.S. Open. During the final round, it was mentioned that Johnson could be assessed a one-stroke penalty for inadvertently causing his ball to move while resting on the green of the fifth hole. Strangely, the USGA decided to wait until the end of the round to officially determine whether or not he would receive a one-stroke penalty.

In the end, he received a penalty but had enough of a lead that it didn’t alter the outcome, and Johnson won the major championship.

Tiger Woods was involved in a rules controversy at the 2013 Masters when he committed an “illegal drop” on the 15th hole during his second round. Woods was asessed a two-shot penalty a day after his infraction occurred.

Those events occurred before the federal PASPA law was overturned by the U.S. Supreme Court in 2018 and legal betting became widespread across the U.S. At the time, discussion of the issues mostly revolved around how they affected the golfers that day, rather than sports bettors. With legal sports wagering now available in over 30 states and jurisdictions in the U.S., clunky rulings like those have the ability to drastically impact not only bettors across the country, but also several PGA Tour partners.

There is willingness from the Tour and its broadcast partners to lean into sports gambling content. Given the organization’s relationships with sports betting operators, it comes as a surprise that it still has official policies that lead to betting controversy.

“You need something more finite than just open-ended,” Sherman said.

Harig says the PGA Tour might need to lobby governing bodies like the USGA and R&A to allow for a local rule or some other rules alteration to ensure rules violations are assessed by the end of each day, rather than just the end of a four-day tournament.

Sherman mentioned that other sports leagues make official stat corrections well after games end, which can impact prop betting, but it’s rare in professional sports for officials to review a play hours after it initially occurred.

Increased transparency as it relates toward rules violations and injuries would be welcomed by sports bettors and sports betting operators. It remains to be seen if the PGA Tour plans to address either of those issues in the immediate future.