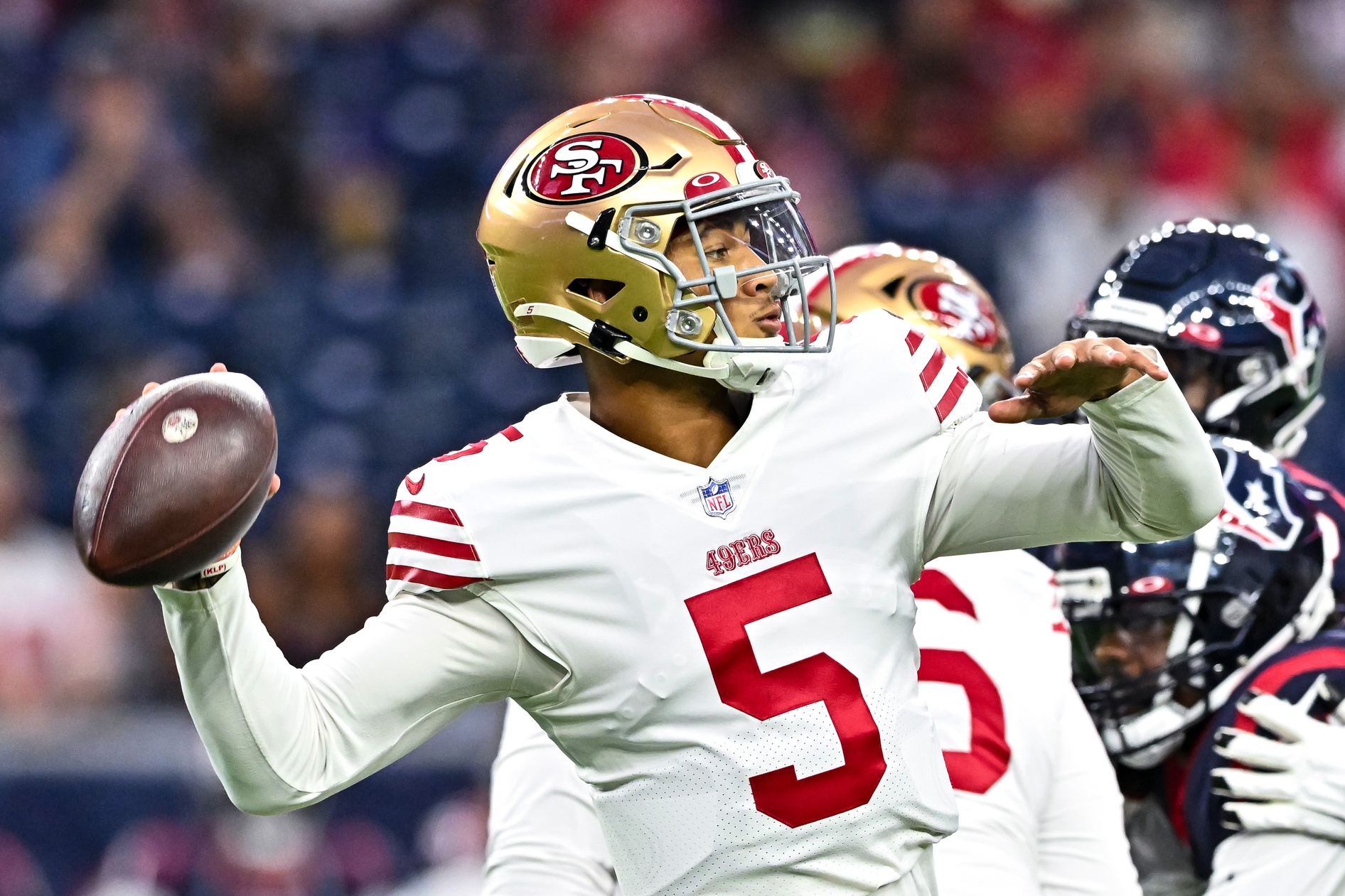 A year after losing in the NFC title game, the Niners are making a risky transition to Trey Lance

Throw a dart. Sometimes, that feels like the best way to predict how the 49ers are going to do in any given season.

After going 6-10 and 4-12 during the first two seasons of the Kyle Shanahan era, San Francisco responded in 2019 with a 13-3 campaign that ended with a trip to the Super Bowl. The Niners followed it up with another 6-10 season in ’20, before responding a year ago with a 10-7 season that culminated with a loss in the NFC Championship Game.

Up and down. High and low. All over the place.

This year could be either one of those extremes. Despite playing in two of the last three NFC title games, winning one and being within a single score of coming out on top in the other, the Niners are making a quarterback change.

Jimmy Garoppolo is out as the starter. Trey Lance is in.

Lance has a ton of talent. There’s a reason why he was selected No. 3 overall in the 2021 NFL Draft. But he’s also inexperienced. Last year as a rookie, he started just two games, three only five touchdowns and completed less than 58% of his passes.

Is he ready for primetime? That seems extremely premature.

Lance will certainly have plenty of things working in his favor. For one, Shanahan is a really good head coach. He’s a bit of a QB whisperer, having gotten the most out of Garoppolo, Matt Ryan and others during his career. So, he’ll help Lance in the transition, putting him in a position to succeed most weeks.

The young quarterback will also be aided by having weapons like Deebo Samuel and George Kittle to throw the ball to, as well as a running game powered by Elijah Mitchell. San Francisco also boasted the NFL’s third-ranked defense last year.

That’ll all help. But the 49ers finished 10-7 a season ago. Will they be better with Lance? That seems hard to believe.

Take the under. Barely.

Thus, the pessimistic side of this future makes the most sense. San Francisco is +190 to not make the playoffs. That seems more likely.

The Rams are the defending Super Bowl champions, so they’re the favorite in the NFC West. That puts the Niners in a battle for the three wild card spots.

The Cardinals, Eagles, Saints and Vikings also figure to be in that mix. Could three of them finish ahead of San Francisco? Without a doubt.

Nobody is walking more of a tightrope this season than Kyle Shanahan. The 49ers head coach is trying to keep his team a Super Bowl contender, while also transitioning to a young quarterback.

It’s treacherous territory. Trey Lance is the future, someone the franchise heavily invested in. But Jimmy Garoppolo is still on the roster, alongside players who know that he’s led them to two of the last three NFC Championship Games and within a play or two of a Super Bowl title.

If Shanahan’s somehow able to keep San Francisco in the mix, guiding them to the playoffs, while also helping Lance blossom or toggling between two QBs, he will be in the conversation for the NFL’s Coach of the Year honors. He’s a great head coach, so that’s certainly possible.

The 49ers are going to be fascinating to watch. If they have a good season, this 20/1 long shot could come in.