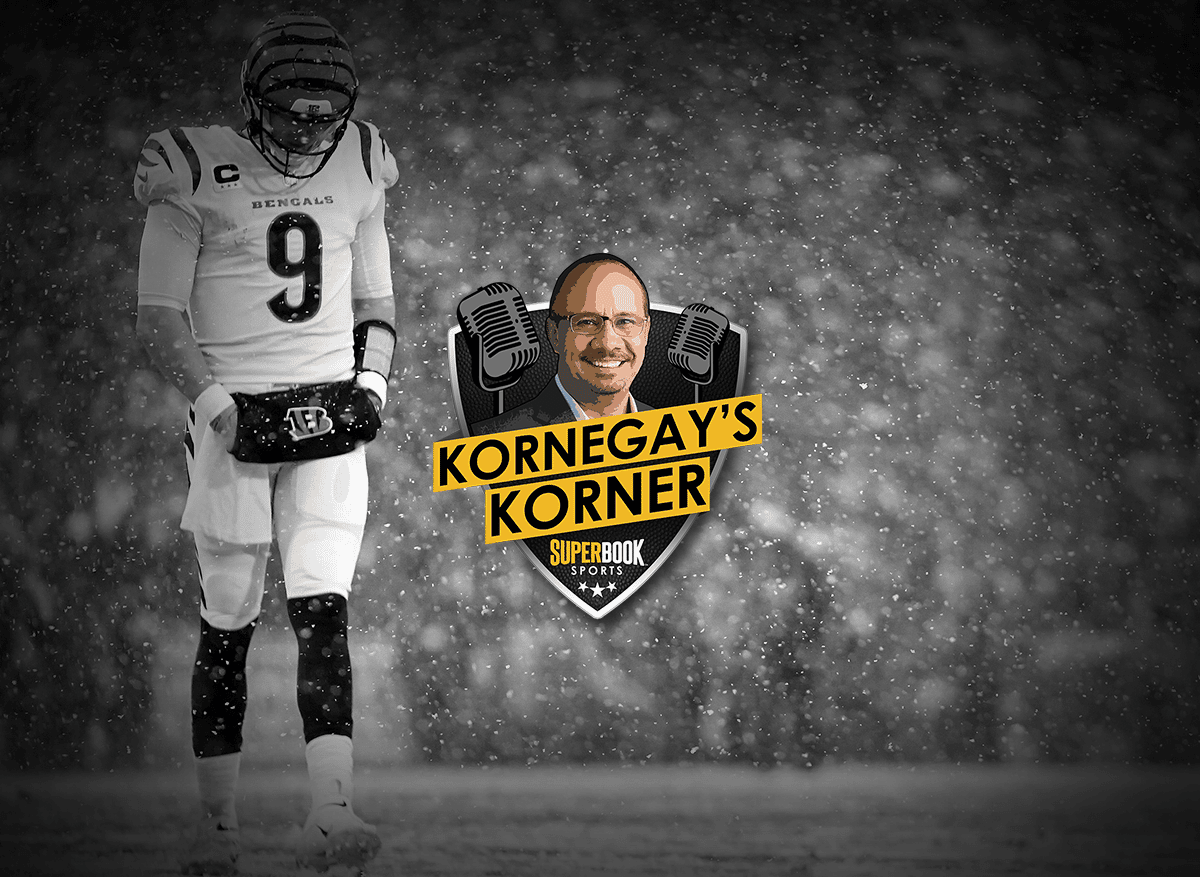 Sitting at 0-2 back in September, the Bengals were a fun little story, a blip on the radar that somehow managed to get hot at the right time to finish out the 2022 season – so hot, in fact, they advanced all the way to the Super Bowl where they lost to the Rams.

Fun run, but it wasn’t for real.

At that point, the Bengals sat at 40/1 to win this year’s Super Bowl. Today, the price has gone up considerably. On the eve of their second straight trip to the AFC Championship Game, Joe Burrow and his Bengals are now +260.

If one follows the money, it’s pretty clear the Bengals are practically America’s Team.

“For the AFC Championship, we opened the line at Chiefs -3,” said SuperBook Sports Chief Oddsmaker Jay Kornegay on Monday afternoon, “and we’re currently at Bengals -1.5.”

That’s quite a shift nearly a week before kickoff.

“We will admit that when we made the Chiefs -3 for this upcoming game, it wasn’t our finest work. We’ll admit to that,” he said in retrospect. “We underestimated the public view of the Bengals. It happens – a line movement of 4 points off the opening number – but not very often.

“Burrow’s performance, along with Mahomes’ injury, have tilted the scales towards Cincinnati. Over 90 percent of the tickets are on the Bengals – and it’s not slowing down anytime soon. I think the bettors have made friends with Burrow.”

Maybe so, but it’s still Kansas City… Patrick Mahomes, Travis Kelce. And it all takes place at Arrowhead.

“We expect some bigger plays to come in on K.C., but not until the weekend,” said Kornegay. “It will depend on Mahomes’ health.”

Even if Mahomes is relatively healthy with an ankle injury he suffered against Jacksonville, there’s been a seismic shift toward the Bengals.

Three bets worth considering on a Wednesday night

This is the third head-to-head matchup between these two Northwest Division foes this season. Thus far, they’ve split the series. But last time out, Portland won by five points.

Both teams come into tonight off big wins. Utah beat Charlotte by 18 points on Monday, while the Blazers beat the Spurs by 20 that same night. But there are deeper trends that that heading into this one.

Utah is 4-0 ATS in their last four trips to Portland and 5-1 ATS in their last six meetings against the Trail Blazers. Both teams have played similarly this season, as well as of late, so let’s take the points here with the road team.

These are two teams trending in opposite directions. While the boast nearly identical records on the season – Atlanta is 24-24, while Oklahoma City is 23-24 – their recent results have been polar opposites.

The Hawks have dropped two-straight games, falling at home to Charlotte and at Chicago. Meanwhile, the Thunder have won five out of six, including an impressive road win at Denver in their last outing.

This is the second matchup between these two teams this season. The Thunder won their lone head-to-head matchup 121-114 on Dec. 5.

The Thunder are playing excellent basketball. Look for them to continue that tonight at home.

The Rockets stink. They’re 11-36 on the season and have lost nine of their last 10 games. Although, they are fresh off of a 119-114 win over the Timberwolves.

The Wizards are not exactly the cream of the crop in the NBA, either. But they have won two-straight games against the Knicks and Magic.

They will be on the second night of a back-to-back for this one. They beat the Mavericks on Tuesday night in Dallas before making the quick, in-state trip to Houston.

The Wizards are 5-1 ATS in their last six road games against a team with a losing home record. The Rockets are 7-15 at home this season.

Look for Washington to get the job done in Houston. The better team will prevail.

Balance matters – The 49ers have won 12 consecutive games. They’re heading to the NFC Championship Game despite starting a rookie quarterback, one who was Mr. Irrelevant in the 2022 NFL Draft. How are they doing it? By striking a perfect balance of run and pass, as well as offense and defense, to go against the grain in the modern NFL.

The Patriots try to turn back the clock – It feels like “The Patriot Way” is becoming a thing of the past. New England failed to make the playoffs this season, after squeaking in last year and getting throttled in the Wild Card round. Meanwhile, Bill Belichick’s assistants keep flaming out when they get head-coaching opportunities. So, they’re all flocking back to Foxborough, hoping to rekindle the magic by getting the band back together. Some think it will work.