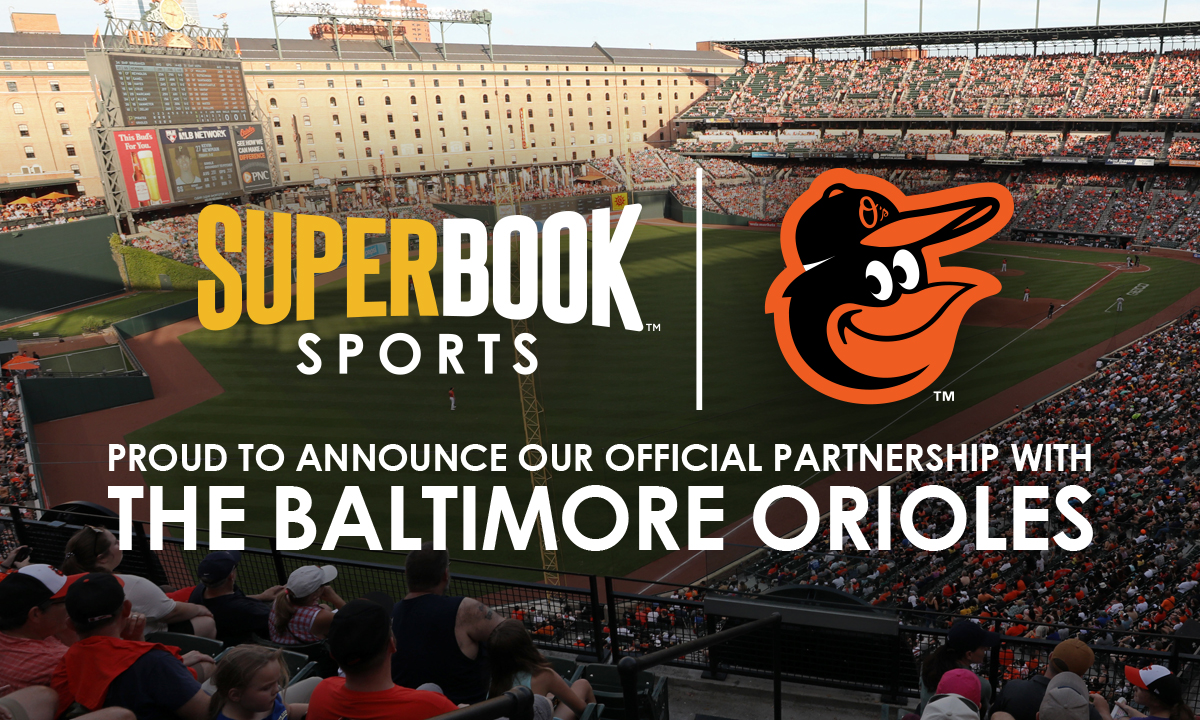 The Orioles announced today a long-term partnership with SuperBook Sports, home to the World’s Largest Sportsbook in Las Vegas, Nevada. This partnership will bring the first-ever retail sports lounge to Oriole Park at Camden Yards. SuperBook Sports has been operating in Nevada since 1986, and has been expanding the SuperBook.com brand nationally over the last two years. This agreement will join two of the most recognized and reputable brands in their respective industries.

Subject to licensing and approvals from the Maryland Lottery & Gaming Control Commission, sports enthusiasts will be able to experience the SuperBook Sports lounge at Camden Yards upon its anticipated completion in 2023. The sports lounge will be highlighted by a social atmosphere, including food and beverages, as well as a comfortable seating for fans to enjoy the game and place live sports bets. It will feature the amenities and viewing experience of a live sportsbook with the ability to place bets from the palm of your hand.

“The Orioles are thrilled to partner with SuperBook to enhance our gameday experience with the introduction of their first-ever on-premise sports lounge,” said T.J. BRIGHTMAN, Orioles Senior Vice President, Chief Revenue Officer. “While our organization is striving to build the next World Series contender in Charm City, we are constantly exploring unique opportunities to engage with Birdland’s diverse fanbase and welcome new visitors to downtown Baltimore. The addition of a SuperBook sportsbook only reinforces our iconic ballpark’s standing as one of the premier entertainment destinations in the region.”

“SuperBook Sports is excited about this partnership with the Baltimore Orioles,” said KRISTIN MACKEY, SuperBook Sports Vice President of Marketing. “The heritage and tradition of the Orioles brand fits perfectly with the SuperBook brand. To be a part of ‘The Ballpark That Forever Changed Baseball’ is an honor, and we look forward to bringing a one of a kind sports lounge experience to fans. The future of the Orioles is bright, and we look forward to continuing to grow together for years to come.”

As one of the foremost entertainment and tourism locations in Maryland, Oriole Park has attracted more than 72 million people to downtown Baltimore since opening in 1992. The ballpark’s success, highlighted by a stretch of Orioles baseball that featured the most wins in the American League from 2012-2016, has generated over $10 billion in economic impact to City of Baltimore and the State of Maryland throughout its 30-year history. The club currently boasts the number one minor league system in all of baseball, with several top prospects expected to graduate to the Major Leagues in the coming years as the SuperBook Sports Lounge launches at Camden Yards.

As part of this partnership, SuperBook branding will be prevalent throughout the ballpark, including on the center field scoreboard and home plate signage, as well as on-site activations during games. SuperBook will also be featured in the MLB Ballpark app and on the Orioles’ social media platforms.

SuperBook Sports has earned its reputation as the most well-respected and well-known brand in American sports betting. The company launched its first sports betting operation in Las Vegas, Nevada, in 1986. Now, with over 35 years of operating experience, SuperBook Sports has become the go-to source for leading sports media outlets, other bookmakers and a favorite place to wager for both novice and knowledgeable bettors alike. SuperBook Westgate Las Vegas boasts the largest sportsbook in the world at over 35,000 square feet, featuring the world’s largest video wall and 4K screen. In October 2020, SuperBook Sports officially launched its Colorado mobile app. In June of 2021, SuperBook celebrated the grand opening of The SuperBook at The Lodge Casino in Black Hawk, Colorado. SuperBook Sports continued its expansion to New Jersey in August 2021, Arizona in December 2021 and Tennessee in April 2022. SuperBook looks forward to launching in Iowa in the near future, while continuing expansion throughout the country, including Ohio and Indiana in early 2023.