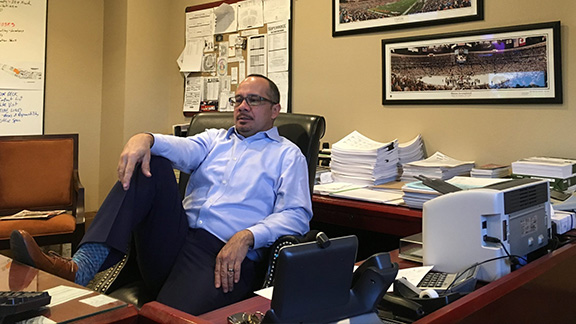 A confluence of events led the executive vice president of the Westgate SuperBook to concoct a new holiday tradition, a novel way to enjoy time with friends and family, injecting excitement into the occasion.

On Wednesday, he again will visit the sportsbook at the nearby Red Rock casino. He’ll purchase a potpourri of parlay tickets that use every angle of the day’s NFL action.

Kornegay tries to keep the games’ rotation numbers organized. A teller might try to help, but it can be confusing. After making several wagers, if a line has formed, he will return to its rear to keep the patrons moving.

He crumples each into a ball and plops them into a hat. Turkey-day visitors pluck two or three. Everyone tracks everyone’s action, adding appeal to the NFL tripleheader.

“I’m now able to watch football,” Kornegay laughs, “instead of playing board games.”

The Thanksgiving games see the Bears giving three points at Detroit, the Raiders -5.5 at Dallas and the Bills -1.5 at New Orleans.

On the SuperBook’s summer advance list of every game on the NFL schedule, it included respective totals of 45, 53 and 52 points on the aforementioned contests. We use those to show how Kornegay might select the tickets.

For one, he will pick a side and either over or under for all three games. A six-way parlay. He’ll make all opposite selections for another six-leg ticket. The $5 specials.

He’ll pick a side in the first game, an over or under in the second and a side in the third. Those three-way versions might cost $10. He’ll construct two-way parlays for $20 that pay $72.

“I spread it around,” says Kornegay, 58. “No strategy. Just random picks — what the lottery might call quick-picks — scattered all over the board. You never know what you’re going to get.”

He tries to limit the early game to just a few to guard against late arrivals getting stuck with a selection that has already lost.

The Lions have played on every Thanksgiving since it became an NFL institution in 1967. They lost 11 times in a recent 12-year run.

“Most of the tickets will lose,” says

If the Bills and Saints are tied 24-24 late, Kornegay’s might be the hottest, noisiest spot on his block.

He recommends the holiday twist to those in nascent legal sports-betting burgs, such as Chicago and neighboring states, that might be tiring of Jenga and other trivial pursuits.

“I’ve had others who have taken it up and done it for their households,’’ he says. ‘‘They think it’s fun, and it is fun.”

A friend had said something off the cuff, about how having a bet on a game would have made it more interesting to watch.

The sports-wagering business had been Kornegay’s career for more than 20 years at that point, and he might have become a bit anesthetized to some of its allure.

About five years earlier, in 2006, the NFL introduced a third Thanksgiving game. A holiday tripleheader. Kornegay put it all together.

From the start, the balled-up tickets were a hit. Friends and relatives stroll inside Casa Kornegay and paw into the hat. Probably seven of the last 10 holidays have produced winners, including a run of six in a row.

Someone won $600. A Kornegay niece hit the jackpot, a ticket that paid more than a grand, a few years ago.

“I can’t remember the game,” he says. “It was close, real close. She needed a total to go over in the very last game. She hung on, and it went over at the end. Hilarious. She was so excited. It was a payday.”

That fortunate niece lived with family in California and now resides in Colorado, which has legal sports betting. She continues the tradition in the Centennial State.

Jay and wife, Pam, who have an adult daughter and son, usually welcome six to eight visitors to their home. I try to inquire when they might open their doors.

Especially to someone he has known for nearly 20 years, who might arrive cradling an exquisite bottle of Papa’s Pilar limited-edition platinum blonde rum?

I think he thinks that first knock on his door won’t be mine.