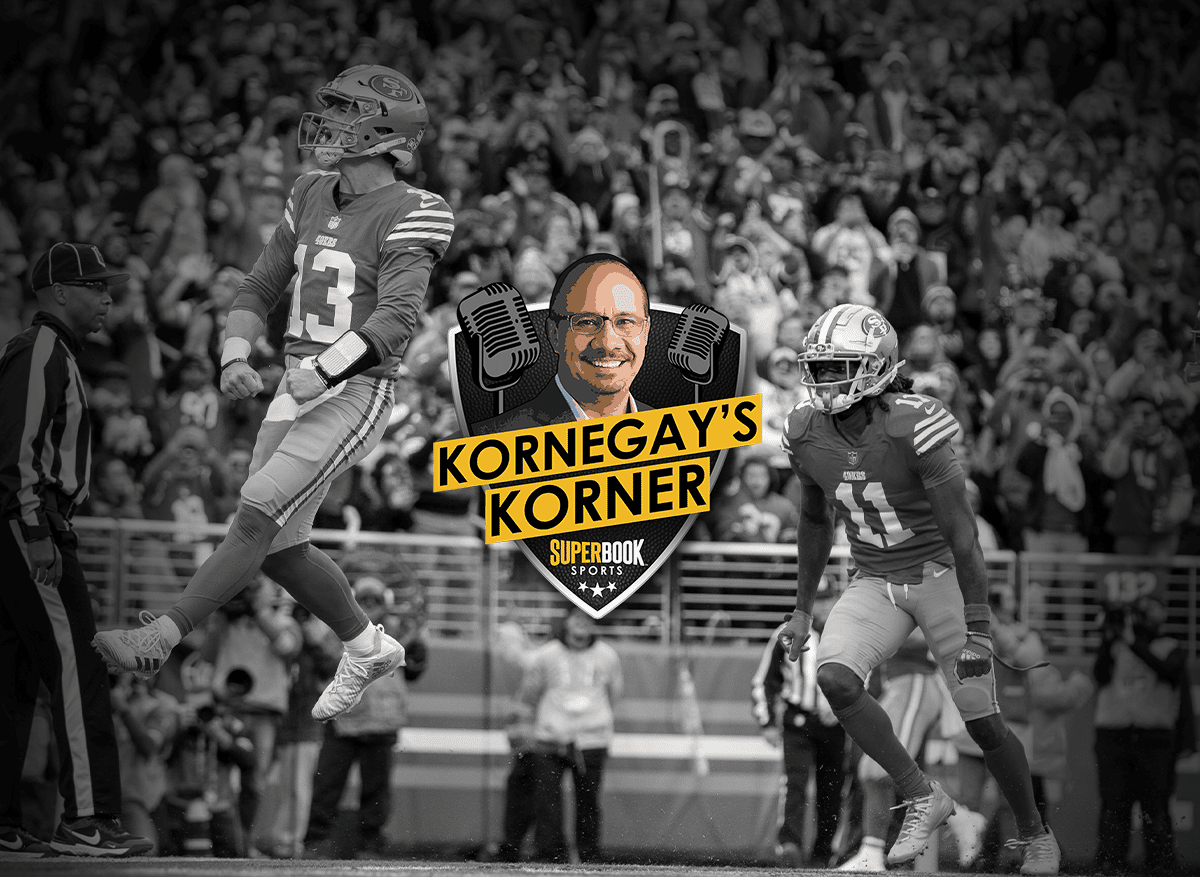 Kornegay’s Korner: Gold in Them There Hills?

Home » Kornegay’s Korner: Gold in Them There Hills?

Kornegay’s Korner: Gold in Them There Hills?

What’s one to make of the San Francisco 49ers? From big expectations and even bigger trades, to devasting injuries and unlikely heroes, the Niners have – for the most part – held tough. Sundays beatdown of the Buccaneers, one that featured a monster game from “Mr. Irrelevant” Brock Purdy that bested future Hall of Famer Tom Brady 35-7, will be one that won’t soon be forgotten. The Bucs have been disappointing all year, but Purdy quite literally came out of nowhere.

Is he enough to make the Niners a viable futures bet to win it all though?

“Those types of performances most likely will create some overreaction,” warns SuperBook Sports head oddsmaker Jay Kornegay. “We don’t put too much stock in a beat down of a 6-7 team.”

If you’re looking to illustrate the reaction bettors have had to the Niners throughout the season – San Francisco opened at 10/1, has been as low as 6/1 and hit a high of 25/1 – look at Kornegay’s recap of the wild ride in the Bay.

“After the Trey Lance injury, they moved to 18/1. Then they went out and beat Seattle. When Jimmy Garoppolo got hot and led the team to a 38-10 blowout of the Cardinals on Monday Night Football, they made it all the way to 6/1.”

And it gets more interesting from there.

“When Jimmy G got hurt, they shot back to 12/1. Then Brock Purdy trots out and beats the Dolphins. After that, and before Purdy got the start, they moved to 10/1. Now they’ve settled in at 8/1.”

Turmoil aside, it’s still a matter of fundamentals for Kornegay.

“I personally like San Francisco due to their great defense, but I’m not sold on Brock at this point,” Kornegay says. “Upcoming games will be tougher as he goes on the road and teams make adjustments. Additionally, losing Deebo makes the hill steeper.”

Only time will tell if there’s truly gold in San Fran. In the meantime, bettors still have googley eyes over the Bills (3/1) and Chiefs (4/1).

Don’t look now, but here come the Lions? Detroit has won five of its last six games to inch closer to .500 with a 6-7 record. The Lions are also climbing up the NFC playoff standings, currently sitting in the No. 9 seed. As the Seahawks (No. 8) fall back down to Earth and the shine has worn off the Giants (No. 7), Dan Campbell’s team is right in the mix.

The Lions would probably need to win out to get to 10-7 and ensure a berth, but don’t rule out them sneaking in at 9-8. For being the laughingstock of the NFL for decades and decades, it’s hard not to have a soft spot for Detroit, rooting for them the rest of the way.

The Lions’ 34-23 win over the Vikings on Sunday proved they’re for real. They beat one of the best teams in the conference and scored in the 30s for a seventh time this season.

Meanwhile, how about those Panthers? Left for dead after trading Christian McCaffrey and Robbie Anderson, Carolina is now just one game back in the NFC South after beating Seattle 30-24, while the Bucs were blasted in San Francisco, dropping them to 6-7. Carolina controls its own destiny, already beating Tampa Bay once this year and playing them again in Week 17.

Detroit and Carolina in the playoffs? Crazier things have happened, as this last month should be a blast.

2. A classic in the Army-Navy series

For the first time in over 100 matchups between the two service academies, Army-Navy was not decided in regulation. This year’s game went to overtime, as Army won 20-17.

The previous 122 meetings between the two teams never resulted in OT. But this time around, Army kicked a game-winning field goal in the second overtime period to earn the W in thrilling fashion after Navy lost a fumble at the goal line.

Despite out gaining Army 284-153, Navy wound up losing the game. Both academies were 4-of-17 on third down, with Navy earning 11 first downs compared to 10 for Army.

Navy also won the time-of-possession battle, but credit to Army for keeping things close enough to get to OT. Both schools combined for 53 passing yards, as the game was won and lost in the trenches.

It wasn’t always pretty, but it was one for the books. The 2022 edition of Army-Navy was a classic.

3. How about them Cowboys?

It was a good weekend for underdogs. They dominated the NFL slate.

The Texans covered +17.5 at Dallas, which was the biggest spread of the week. The Broncos covered +10.5, despite being down 27-0 at one point in the first half.

The Jets covered +10.5 at Buffalo, hanging with the Bills on the road even with a banged-up quarterback. The Jaguars beat the Titans as an underdog, winning 36-22 in Tennessee, showing they’re on the cusp of becoming a contender.

And the Chargers won as a home dog. Los Angeles took down Miami on “Sunday Night Football,” sending the Dolphins to a second-straight loss. This bookended the Rams inexplicably winning as an underdog in the same building on Thursday.

What’s the takeaway, other than the NFL being nearly impossible to predict on a weekly basis? Well, it’s two-fold.

One, this isn’t college football. Teams are pretty evenly matched, even if their records indicate otherwise. So be leery of big numbers.

Two, teams with everything to play for are no lock. Tennessee had more to lose than Jacksonville. Las Vegas had more on the line than Los Angeles. Dallas is in the mix, while Houston isn’t. And Kansas City is battling for the No. 1 seed, while Denver has clinched a sixth-straight losing season. Playing for pride nearly outweighs vying for a playoff spot.

Video of the Week: Mahomes once again shows he’s a wizard playing QB