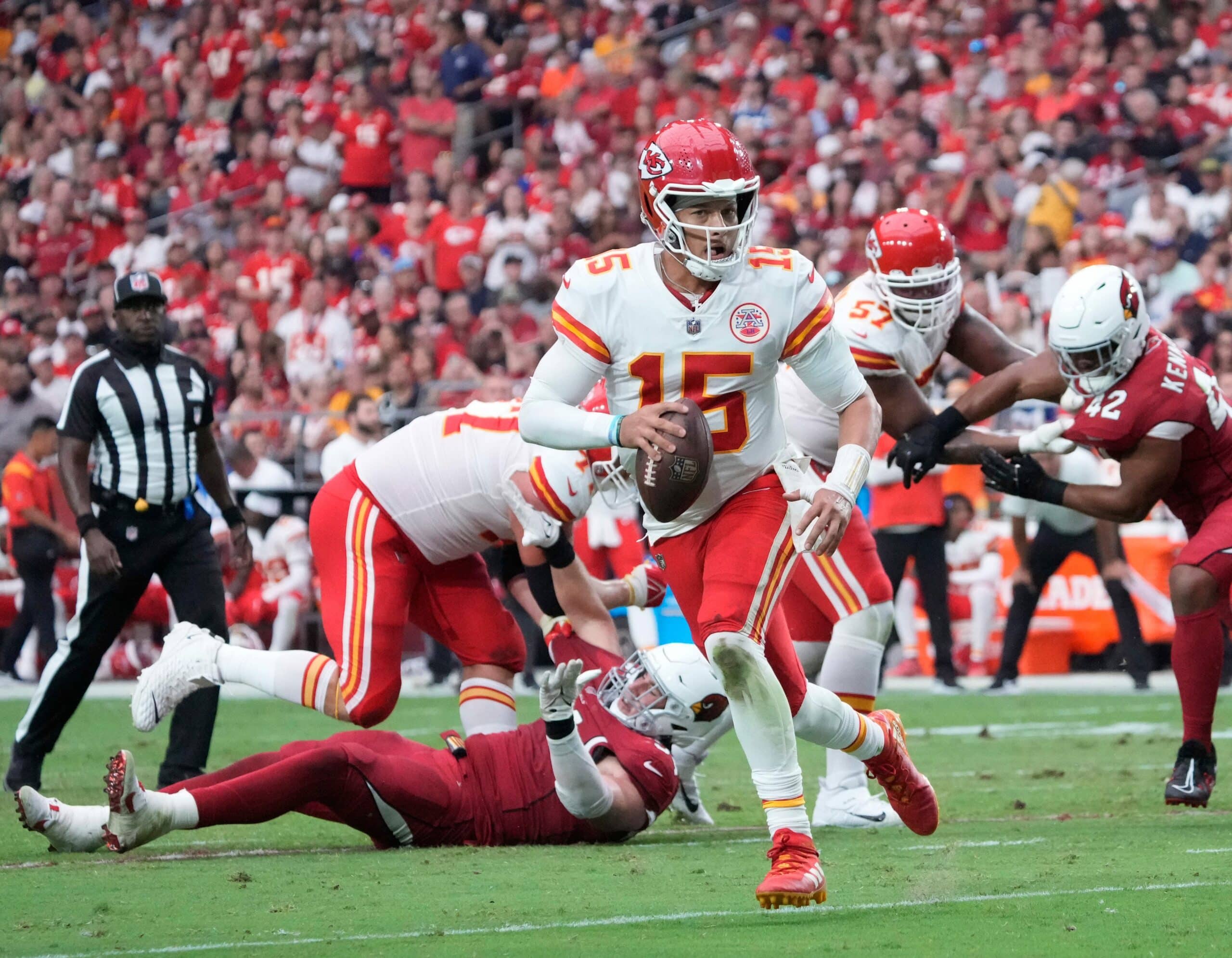 Plus, the Dallas Cowboys will be down Dak Prescott, which will jolt the Week 2 NFL odds market.

UPDATE MIDNIGHT ET SUNDAY: Kansas City (1-0 SU and ATS) got its offensive machine in gear right out of the gate. Patrick Mahomes threw for 390 yards and five TDs, with no INTs, as the Chiefs steamrolled Arizona 44-21 laying 6 points on the road.

Los Angeles (1-0 SU and ATS) had a more stern challenge at home against the Las Vegas Raiders. But the Chargers nabbed the win and cover, 24-19 as 3.5-point favorites.

Early bettors of NFL Week 2 odds were intrigued by K.C.

“We opened the Chiefs -3 and moved quickly to -3 (-120), and finally -3.5, after a respected player didn’t balk at laying the 20 cents,” Murray said Sunday night. “Kansas City was very impressive today. We’ll see how much of that is the fault of the Cardinals. This is a pretty solid matchup for a Thursday game. There should be really big handle.”

But worse, Cowboys QB Dak Prescott suffered a thumb injury in the fourth quarter. Postgame, it was revealed that he’d need surgery and could miss several weeks.

Defending AFC champion Cincinnati (0-1 SU and ATS) got off to a bumpy start, too. The Bengals had five turnovers, plus a missed PAT in the final seconds of regulation and a missed field goal in overtime. If either of those connect, Cincy beats Pittsburgh. Instead, the Bengals lost 23-20 as 7-point home favorites.

The SuperBook will put Bengals-Cowboys back up Monday morning with a number that will surely be miles from the Cowboys -2 opener. Multiple oddsmakers opined late Sunday night that the line could flip as far as Bengals -7.

“It still doesn’t seem possible that the Bengals lost, but all of a sudden, they’re in scramble mode,” Murray said.

That scramble could be much easier against a Prescott-less Cowboys outfit.

UPDATE MIDNIGHT ET SUNDAY: Tampa Bay (1-0 SU and ATS) didn’t exactly light up the scoreboard under the bright lights of Week 1 Sunday Night Football. But the Bucs held Dallas to a first-quarter field goal. So a pedestrian effort by Tom Brady and Tampa was enough to net a 19-3 win as a 2.5-point road favorite.

“We opened the Bucs -2.5 and it’s now off the board,” Murray said, noting Bucs-Saints came down once Tampa kicked off at Dallas on Sunday night. “I’m not sure what to make of either team yet. The Saints probably lose badly today if the Falcons don’t do what the Falcons always do and take their foot off the gas. We will likely need the Saints here. The public loves Tom Brady.”

The line and total were unchanged in the hour or so the game was up Sunday night. Bucs-Saints will go back on the NFL Week 2 odds board Monday morning.

UPDATE MIDNIGHT ET SUNDAY: Chicago (1-0 SU and ATS) was one of the Week 1 surprises, albeit it in a monsoon at Soldier Field. Justin Fields and the Bears slogged their way to a 19-10 upset of San Francisco, winning outright as 6.5-point underdogs.

Green Bay (0-1 SU and ATS) was among the Week 1 disappointments, even after going off as a 2-point road ‘dog at Minnesota due to late-breaking injury news. The Packers got only a third-quarter touchdown in a 23-7 loss. Wideout Allen Lazard, and offensive lineman David Bakhtiari and Elgton Jenkins sat out.

There was early interest in Bears-Packers at The SuperBook, but not on the spread.

“The sharp money came quickly on the Under, and we knocked the total down a point to 44.5,” Murray said, before noting this week’s Sunday nighter became more of a key game due to Week 1 results. “All of a sudden, this game is really intriguing to people who aren’t Bears or Packers fans. Chicago rallied to stun the 49ers, and the Packers looked like the Packers we saw in Week 1 last year (vs. Saints). I still believe Aaron Rodgers will be fine. Minnesota is better than people realize.”

While the total dipped a point, the line was stable tonight at Packers -9.

By contrast, Arizona (0-1 SU and ATS) really had no chance at all against red-hot Patrick Mahomes and Kansas City. The Cardinals, catching 6 points at home, got torched 44-21.

“We opened Raiders -3.5 and are still there,” Murray said. “The Cardinals’ defense got shredded by Mahomes and Co. at home, and now they have to go on the road and take on the Raiders. The schedule makers didn’t do the Cardinals any favors with this start to their season. This figures to be a big-handle game in the afternoon, with us needing the Cardinals.”

While the point spread held firm tonight, the total dipped a point to 51.5 at The SuperBook.

UPDATE MIDNIGHT ET SUNDAY: Buffalo (1-0 SU and ATS) was a little rusty in the first half against the defending Super Bowl champion Los Angeles Rams. But Josh Allen and Co. cranked it up in the second half and rolled 31-10 laying 2.5 points on the road.

Meanwhile, Tennessee (0-1 SU and ATS) stubbed its toe at home, letting a 13-0 halftime lead slip away against the New York Giants. The Titans, giving 5.5 points, ultimately lost 21-20 on a late Giants touchdown and 2-point conversion.

Titans-Bills is the first of two Monday night games in the NFL Week 2 odds market.

“We opened the Bills -9, and the Bills are already seeing more action than any other Week 2 side,” Murray said. “I’d expect that to continue throughout the week, considering the incredible performance from Buffalo this past Thursday, and the Titans huge meltdown at home. The Bills will be in every teaser and moneyline parlay that’s coming. And that’s probably something we will be dealing with all season.”

Later Sunday evening, The SuperBook moved Buffalo out to -9.5. The total dipped a point to 49.5.

Vikings-Eagles proved one of the more challenging lines to set on the NFL Week 2 odds board.

“We went back and forth on this one, with the room split between Eagles -2.5 and Eagles -3,” Murray said. “Both teams were impressive, although the Eagles did let the Lions back into the game and into the back door for a cover. We’ve seen a few guys take the +3 (-110) with the Vikings, but nothing that’s caused us to move the number yet. This should be a good two-way game.”

Late tonight, the spread remained Eagles -3, and the total was up a tick to 49. Vikings-Eagles is the second of two Monday night games in Week 2.