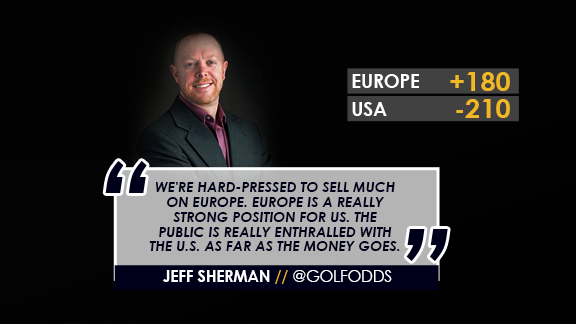 Americans favored over Europeans, but bettors split on Ryder Cup

The United States will enter the Ryder Cup as the betting favorite over the Europeans, and bettors are somewhat divided which side will prevail this weekend at Whistling Straits in Wisconsin.

The Americans are -200 favorites to defeat the Europeans, according to Caesars Sportsbook, despite having lost four of the past five Ryder Cups. Caesars has Europe at a 2-1 underdog, and a tie listed at 12-1. Europe, as the defending champion, needs 14 points to retain the Cup, while the U.S. must earn 14.5 points.

Caesars Sportsbook told ESPN on Thursday morning that 52% of the bets were on Europe, but 65% of the money was on the Americans.

“We’re hard-pressed to sell much on Europe,” Jeff Sherman, vice president of risk management for the SuperBook in Las Vegas, said. “Europe is a really strong position for us. The public is really enthralled with the U.S. as far as the money goes.”

The odds are similar at sportsbooks in the United Kingdom, where the U.S. is favored and attracting the bulk of the action. According to OddsChecker, an odds-comparison website that tracks the betting action at European and American sportsbooks, 69% of the bets with U.K. bookmakers are on the U.S. to lift the Cup.

The U.S. also was favored in the most recent Ryder Cup in 2018, but suffered a 17.5-10.5 blowout loss in Paris. This year’s U.S. squad is stacked with eight of the top 10 players in the Official World Golf Ranking, though, and home-course advantage is factored into the price, Sherman said. Europe has won two of the past three Ryder Cups on American soil.

“This is the one golf tournament a year where they encourage the fans to be involved,” Sherman said. “It’s not like any other tournament. You get a lot of energy involved, so it plays into the betting market.”