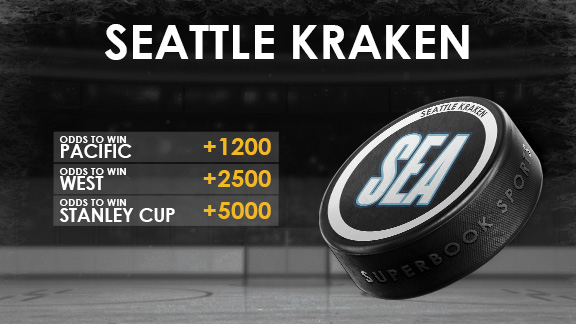 In Las Vegas, the odds favor the Seattle Kraken | King5

LAS VEGAS — It is anyone’s guess how the Seattle Kraken may fare in their inaugural season, but you can take your bet in Las Vegas.

“We have them at 50-1 to win the Stanley Cup,” said John Murray, executive director of the Westgate Superbook in Las Vegas.

Murray said betting on hockey is now one of the hottest slips in town, based on the success of the Vegas Golden Knights.

Even on a football Sunday, Mike Morris of Seattle walked through the building, wearing his Kraken hat and Mariners shirt.  The owner of Ballard’s Fuel Sports Bar was making some last-minute bets on Sunday Night Football, but considered making bets on his new hockey home team.

“Maybe for fun, put a little bit on it, make it more exciting,” he said with a smirk.

The Westgate Superbook is one of the biggest in Vegas, with 4,200 square feet of digital screens, upgraded several times since it opened in 1986.   Murray said it has adapted and grown as gambling has become more mainstream, legalized in multiple states, and several leagues including the NHL striking up their own betting deals.

“I always knew everyone was betting on games, I’m glad it’s finally being acknowledged,” said Murray, who also said the arrival of the NHL and NFL into town has been a boon for business.

As far as the Kraken are concerned, when Westgate first opened the line for the new season, Seattle was at 100-1. The Kraken are now at 25-1 to win the Western Conference. That is in comparison to the 500-1 odds that Vegas had in its first year.

Murray said there is a reason for all that.

After the Las Vegas Golden Knights had a great inaugural season, Murray said, “we had huge liability pretty much every time they played, and that is something that Washington state will have to deal with when they have sports betting rampant there.”

“Sportsbook operators will probably be rooting against the Seahawks and against the Kraken every night, which is an intriguing position to be in,” he said. “We pretty much always win when the Knights lose or the Raiders lose because people in town are betting on their favorite local team.”

Murray said the Kraken “brought in some solid veteran players.

“I love, I really like their logo, nickname; they’ve done a lot of good things,” he said.

And based on the success of the Knights?

“We learned that mistake,” Murray said. “With the Kraken, we’re going to take a wait-and-see approach.”